Aida Rodriguez Talks To Comedy Hype: "I Do This For The People" -

Aida Rodriguez Talks To Comedy Hype: “I Do This For The People” 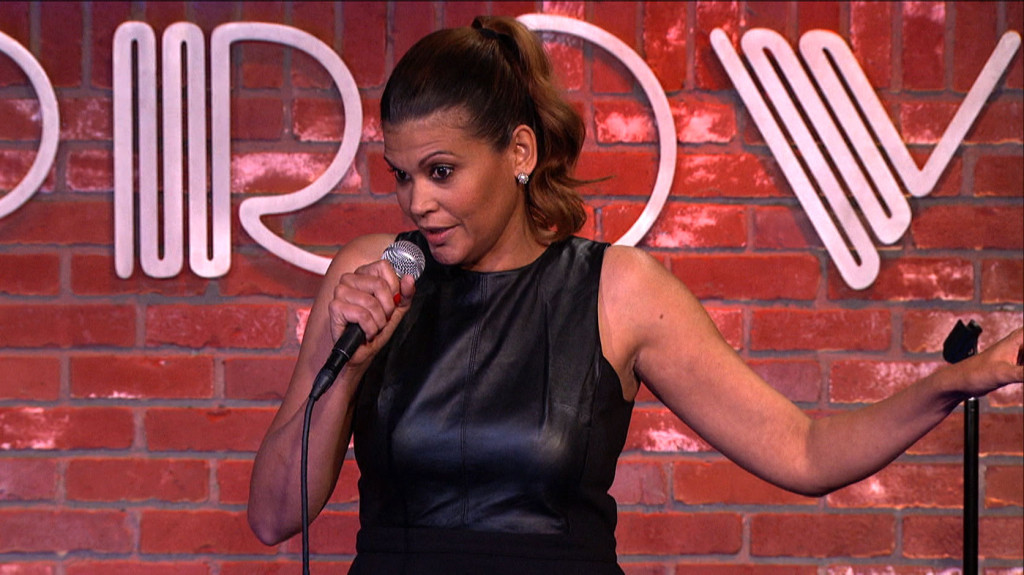 In this interview conducted by our contributor Amber Bolden, Season 8 “Last Comic Standing,” contestant Aida Rodriguez talks to Comedy Hype. She details the importance of being a thoughtful comic and representing the voices in comedy that are often minimized and diminished. In an a previous talk with Latina.com, Aida was quoted by saying “I go where I am celebrated, not where I am tolerated.” Needless to say she will be more than welcome in the building with Laff Mobb’s upcoming Black Out Tuesday show at The Comedy Store in Los Angeles, Tuesday Aug., 5th.

CH: YOU GOT SOME REALLY GREAT FEEDBACK ON “LAST COMIC STANDING”, WHEN DID YOU FEEL MOST VALIDATED IN YOUR CAREER?

AR: Early in my career, I did a show with Kevin Hart and at that time that instance let me know I wasn’t ready. Jay Leno said ‘“It’s never too late but I can be too soon.”’ This time [with Last Comic Standing,”] six years later, I was ready. With ‘Last Comic Standing,’ I felt like ‘I know who I am.’ I was afraid, scared and nervous but I was ready. I was operating from authenticity and the people can feel that and recognize that. What is happening in our world is this image of celebrity but they have no talent that they are developing. The way we are portrayed on TV – we have no substance, especially with women of color. If you go outside of L.A., Atlanta and New York areas you start to see regular people. I think the people can sense that I’m their voice so if all I talk about is my new purse or my $3000 puppy – it’s insulting. It’s insulting to the people that go out every day, work hard and make a living, I want to be their voice. And for me, even though I live in Hollywood, I’m not of it. What matters is the real stuff.

CH: WHO DO YOU THINK WILL WIN “LAST COMIC STANDING” AND WHY?

AR: I don’t know who will win. That’s hard but I can tell you who I want to win. Nikki [Carr]. I want Nikki to win one – she’s a mother, two – she’s a single mother, Three, she’s a woman, [four] she’s a lesbian. I mean there is such an amazing pool of talent … Lachlan is amazing …I mean Joe Machi is a great joke writer and Rod Man is just so funny. It really is just an amazing pool of talent but I’ m really bias with my women so yeah I’m rooting for Nikki.

CH: IS THERE PRESSURE FOR WOMEN IN COMEDY TO WORRY ABOUT THEIR LOOKS?

AR: I can tell you, the idea that attractive women can not be funny is archaic but very prevalent. Even when you think about Lucille Ball she was a model, she was beautiful and she was one of the funniest women that made it possible for women like me today. We are very narcissistic as a culture. In this country we think beauty starts and end with us. The idea that you can’t be an attractive woman, or even man for that matter, and still be funny is a constant battle. Bill Bellamy, even as a man, was dealing with this issue long before I was and it’s not right. For the powers that be, it’s a threat for a woman to be smart and edgy and funny.

CH: WHAT DO YOU THINK ABOUT FEMALE COMEDIANS LIKE CHELSEA HANDLER? 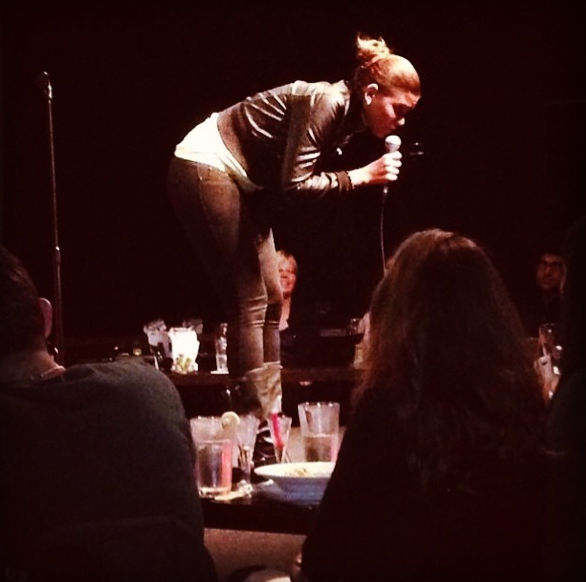 CH: WHO HAS BEEN YOUR BIGGEST SUPPORTER?

AR: My son and daughter are my biggest supporters. We are all vulnerable and being a single mom it’s hard. When I decided to pursue this, I talked with my family and we all had to agree. I relocated my family from another state. Before I put anything out there, I run it by them first. But they’ve been amazing they tell me to go far continue to do it. My brothers have always been big supporters and my mom is coming around to accepting this is what I want to do… and she watches clips from “The Last Comic Standing,” but my children have been my biggest supporters.

CH: HOW DID YOUR START IN COMEDY BEGIN?

AR: I had a lot of friends who always supported me doing stand-up. One of my friends, Brad Kaaya who wrote for “MAD TV,” really supported me. He said you could really do stand up and I started writing sets and really working at it. The first time I was on stage was at Jamie Foxx’s spot, The Foxxhole; and Chris Spencer put me on stage. Pookie [Wiggington] from the Laugh Factory put me on stage for the first time in L.A. and I’m there all the time.

CH: HOW DOES YOUR CULTURE BACKGROUND AFFECT YOUR PROFESSION?

AR: Well, in our culture being a stand-up comedian is not really a good job for a woman to have but my family has accepted it a long time ago, that I was not going to follow the rules. My culture definitely impacts my stand-up. I am not a Latin comic but I am a comedian who happens to be Latin. With that, I don’t want to embarrass people of color.

CH: WHAT HAS BEEN YOUR BIGGEST OBSTACLE SO FAR?

AR: That I am not your stereotypical comedian. Sometimes people expect you to be a certain way and because I might not be jumping around or I might not be a certain way on stage that can be an obstacle. Also I’m met with opposition sometimes because my comedy is so edgy and hard-core. I think it makes people uncomfortable. But I think we need that representation. We need to tell our story, Chris Rock did it; Dave Chappell did it – now I’m going to do it.

CH: WITH TRACY MORGAN RECENTLY BEING IN A ACCIDENT, DO YOU SEE IT AS SOMETHING THAT WILL HELP OR HURT HIS CAREER?

AR: I don’t think it will either… unfortunately because he is a celebrity has to go through everything under a microscope. But I don’t think it will really do either. If he’s smart he will use it to his advantage and bring some comedy to it and honestly we are comedians that’s what we do, we can’t help it.

CH: WHAT DO YOU THINK YOU BRING TO THE TABLE AS A COMEDIC ARTIST?

AR: Keenen Ivory Wayans said that I am a “dose of truth serum.” For me that was major. My comedy reveals the admission of what’s going on in the world. I’m not the type of comedian that walks around pretending that everything is ok when it is not ok. When presented through humor [a lot of tough situations] are easier to digest and present. At the “Latin Golden Globes,” people were blown-away because it was refreshing to hear [me] speak the truth and make them uncomforted and bring them back full circle; and as comedians, that’s what we do. 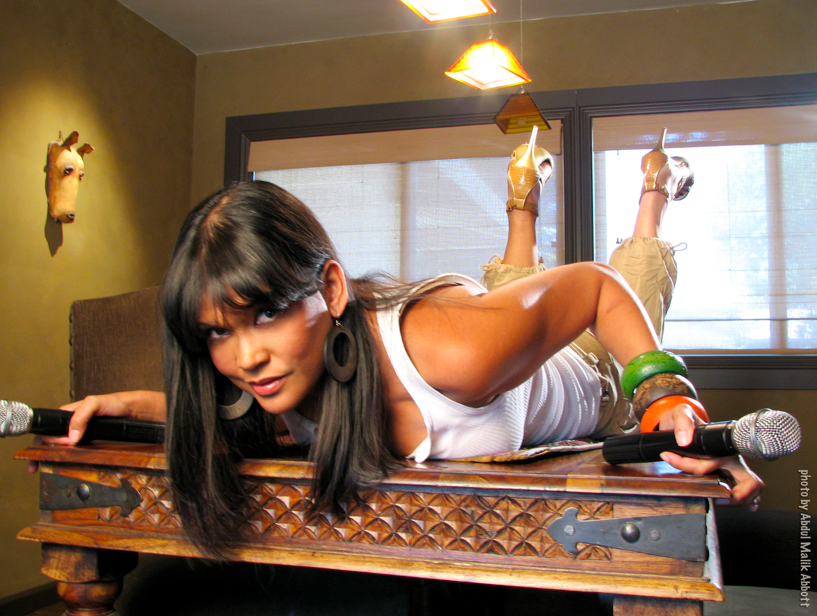 CH: WHAT DO YOU THINK IS THE BIGGEST MISCONCEPTION THE PUBLIC MAY HAVE ABOUT COMEDIC ARTIST?

AR: A big misconception is that you have to adhere to certain type of humor. I hate when I hear statements like ‘That comic is ghetto.” It’s not that the comic is ghetto – but that their point of view comes from a different perspective. There are a lot of other comics who I think are buffoons and this is not who we are but it is how we are represented. I want to be a thoughtful comic. There are plenty women of color who are well read, educated, have degrees and they have no representation. This misconception that there is just one type of humor or that you have to jump around like a buffoon is wrong. I want to represent people of color – and not just people [Latino communities] I mean people who represent the African Diaspora from all over.

AR: I get discouraged every day. [My family] made a huge sacrifice as a family when we relocated. When I have my moments we all feel it but they are there supporting me. We are operating in a business that is structured for us not to get it in – honestly. It is for survival of the fittest and for those who will survive it to the end. Last year was really tough for me, I lost my grandmother and uncle last year and so to get back on stage tell jokes and make other people laugh is not something I thought I could do. But I decided I ‘gotta be true to the people.’ I need to be a voice for all of the people who need someone to speak on their behalf. Back in the day comedians used to be the healers of the community. Comedians would make people laugh that were sick or not well and that would be their medicine. We need to remember that and we need to get back to that. I remember, after one of my sets, I saw this woman approaching me. I thought she was upset. I thought maybe something I said had offended her. But she walked up to me and she thanked me. She told me that her son had committed suicide a couple of weeks earlier and [my show] was the first time she had smiled since then. In another set I was talking about my battle with self destructive eating habits and I got a letter from an actress –actually a very well known performer – saying that she was thinking of going back to bingeing but, instead of going back to that, after watching my set she’s going to a [support] meeting. And that’s what I do this for…I don’t do this for the industry. I do this for the people. As artists that is what we do. If we are not doing that, we’re not doing our job.

People should always support women in comedy… all jokes are born of a woman and no one should forget that. Respect these women. They are warriors, they are fighters, they are mothers – respect these women. There are a lot of great, funny female comedians on the rise who are funny and have different perspectives. If you travel or if a female comedian is coming to your city go check them out. We need your support.

Aida shared that she has a new show produced by Steve Hofstetter “Laughs, “ which premiered on Saturday Aug. 3 on FOX. You can catch the new series every week on FOX. She also recently hosted the “Imagen Awards,” which according to on pbsscocal.org will air 9/26/2014 on PBS. You can also catch her starring in TV-One’s “Mirror Mirror,” on Oct. 31 alongside Harry Lennix, Victoria Rowell and Karrueche Tran. 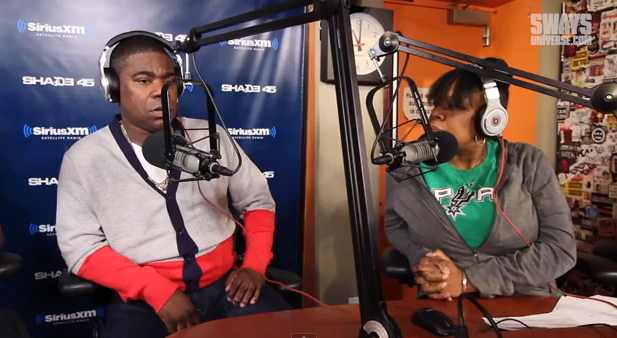 Read More
As he stopped by Sway In The Morning to speak on his new tour Turn It Funny, Tracy…

Read More
Yesterday in an interview, Aries Spears suggested that Kevin Hart uses a team of writers for his stand-up… 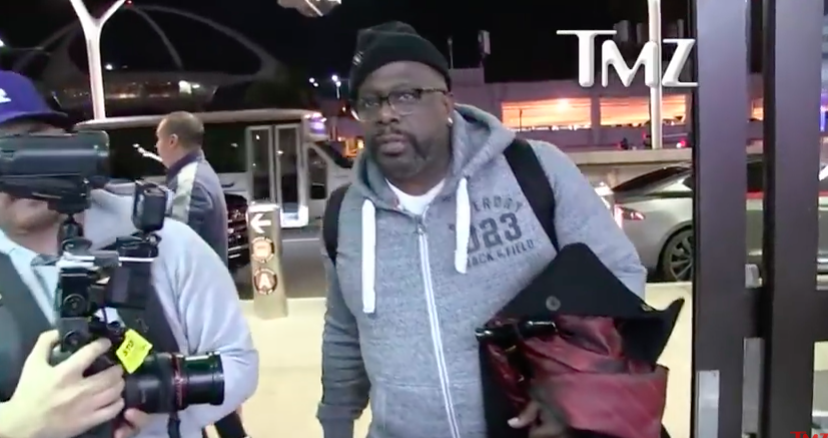 Read More
Last week, Hollywood and the comedy world was hit with a bombshell when Russell Simmons was accused of… 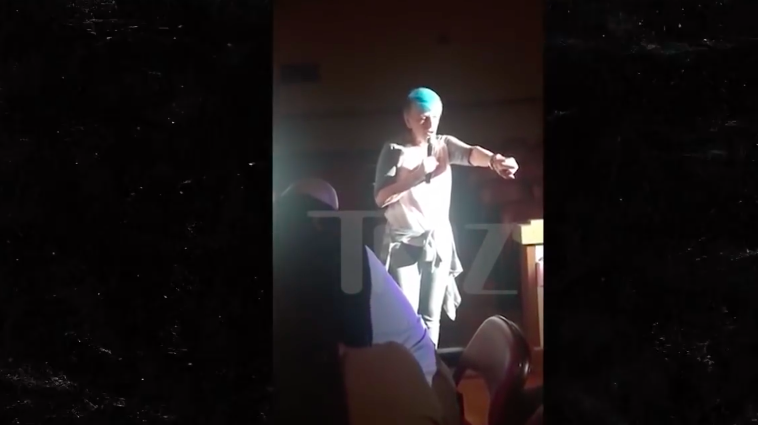 Read More
Veteran comedian Lisa Lampanelli had a rough show the other night in San Jose, CA. when a heckler…