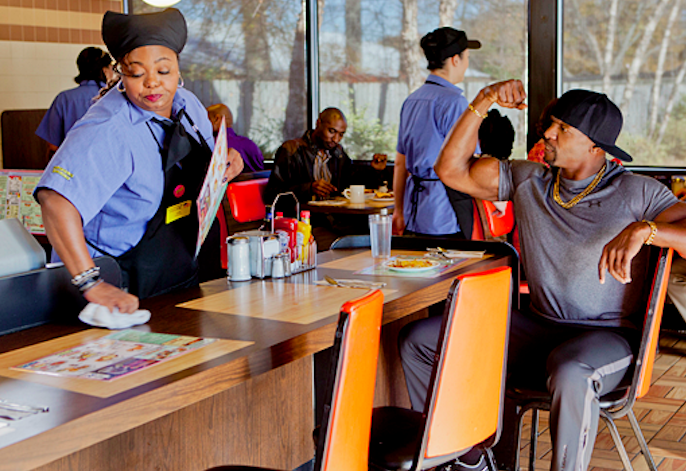 Since originally getting into comedy over 18 years ago, Cocoa Brown (above with Terry Crews in film, The Single Moms Club) has consistently stood out as one to watch. Tonight at 9/8c, Bounce TV will premiere Cocoa’s newest set of material for the networks comedy special series Off The Chain. We had a chance to talk with Cocoa before the premiere as she discussed stand-up comedy, detailed a story of seeing Marlon Wayans perform live as Richard Pryor and future plans.

CH: YOU GOT INTO COMEDY YEARS AGO AND SEE A LOT HAS CHANGED. WHEN YOU SEE THE CURRENT INFLUENCE OF ONLINE COMEDY GETTING A LOT OF ATTENTION, WHAT’S YOUR THOUGHTS?

CB: Right now it’s what’s hot and unfortunately it makes dollars and cents to the powers that be. Do I think it’s right when you have people in the game grinding and who really take this business serious and who’ve put time on stages? No I don’t think it’s fair. Unfortunately, we are in the era that dollars and cents make way more sense than talent. It is a necessary evil. I have to be on outlets like Twitter and other social media sites. Some things I think I’m a little too old for, but if you want to be relevant right now you have to play the game.

CH: YOU GOT YOUR START IN DC; THE SAME PLACE MARTIN LAWRENCE IS FROM. SEEING THAT HE HAS DECIDED TO MAKE ANOTHER PUSH IN STAND-UP, HOW DO YOU FEEL ABOUT THAT?

CB: I welcome him with open arms. To me he’s never left. As long as there are Martin reruns I don’t think he’s ever left.

CH: COMEDY SPECIALS USE TO BE THE THING TO HELP COMEDIANS GET TO THE NEXT LEVEL AND HAS SINCE LOST ITS POWER. SINCE YOU’RE ABOUT TO DO YOUR NEWEST SPECIAL, WHAT VALUE DO YOU SEE IN DOING A COMEDY SPECIAL NOW?

CB: It’s a lot easier now to create your own special. Back in the day it took a major network like a Cinemax, Showtime, Comedy Central, and HBO to knight you and give you a special because they felt you were worthy. Now anybody with the right amount of money and connections can make a comedy special and get it on the air. I think it’s all about the craft and those who are true comedy lovers can see what’s good and what’s bull. I leave it to the fans. Now are specials doing numbers like back when Eddie Murphy Raw was out? “Hell no” but they are important today because they represent some sort of relevancy.

CH: WE’VE DISCUSSED THE DIFFERENCES BETWEEN WHITE & BLACK COMEDY ROOMS, DO YOU SEE A DIFFERENCE?

CB: They’re always a difference. I think if you are true comedian, you can perform in front of anybody. I know that every comedian has his or her lane but any true comedian can perform anywhere. If it’s authentic it can be put in front of anyone. I use to always hear black rooms pay your bills and white rooms get you deals. I have found that to somewhat be true. In this day and age, it’s about putting your craft in front of the right people. Now a days, you just don’t know who that right person can be.

CH: THERE ARE TALKS OF BREWSTER’S MILLIONS GETTING ANOTHER REMAKE, AND WE MAY SOON SEE RUSH HOUR ON TV. IS THERE A FILM YOU THINK WOULD MAKE FOR A GOOD REMAKE?

CB: If I could do a remake, I would love to see Cooley High remade or The Mack. As far as comedy, if they could do Stir Crazy again that would be funny. I could see Mike Epps, Marlon Wayans, and even Kevin Hart playing in it. Zach Galifianakis could play Gene Wilder. (laughs)

CH: MARLON WAYANS PRYOR AUDITION FROM 2009 LEAKED ONLINE, DID YOU GET A CHANCE TO CHECK IT OUT?

CB: I did. Actually I witnessed Marlon when he was preparing for the movie many years ago. He came into a comedy club that was in Studio City, California. He went on stage. My ex-husband and I were mesmerized because we actually watched him become Richard Pryor into the set. It was amazing to watch. He walked in as Marlon, and then went into his jokes. He talked about preparing for the Richard Pryor movie. As he began to tell his jokes, we watched his transform into Richard. There was no setup or nothing. We were like is he channeling Richard Pryor right now? My ex and I, talked about all the way home. It was all in his mannerism, he was telling his jokes as Richard Pryor. It was one of the most fascinating things I witnessed.

CH: A PATRICE O’NEAL DOCUMENTARY IS BEING PUT TOGETHER, ANY STORIES ON HIM?

CB: Awesome. I only have been around Patrice a hand full of times in my whole career. I admired his work and liked that he was straightforward. I don’t know a lot on his back-story, so I would love to see a documentary on him. I think he was that lion that didn’t get a chance to roar.

CH: ARIES SPEARS AND MIKE EPPS HAVE BOTH PUBLICLY CRITICIZED KEVIN HART IN INTERVIEWS, WHEN YOU SEE OTHER COMEDIANS DOING THAT WHAT DO YOU THINK ABOUT IT? 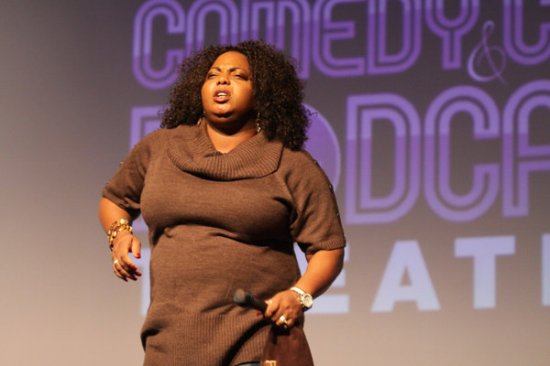 CB: Well we all compete against each other. If anybody is saying different is lying. We still see it as competition. I don’t know the history of their relationship with Kevin. But for my history with Kevin, we use to share the same college agent for quite some time, and he used to open for me. I remember we were on a college show together. He did his 30 minutes for me, I remember him leaving and looking at him and knowing at that very moment he was about to transcend, so when it happened I wasn’tshocked. I was happy for him. He found a lane that maybe some of us missed, because he has passed a whole lot of us. He has become our modern day Richard, Eddie, Martin, and he’s that dude right now. I applaud him! For me personally, I watch and learn. I ran into him in Vancouver, and he broke a lot of things down to me that made a lot of sense. I told him thank you for that knowledge.

CH: AS YOU CONTINUE BUILDING YOUR BRAND. WHAT IS THE MAIN THING YOU THINK FANS WILL NOTICE?

CB: You guys can expect some projects from me that I’m not just a funny sidekick. I’m not just the funny girl. I’m an actress and I can act. I can do more than just provide laughter. People are going to be surprised when they see that there is more to me than that. Defining my One Funny Momma brand, I am a mother that happens to be funny but I can relate to everyone because everybody has a mother whether they like them or not.

Cocoa’s “Off The Chain” comedy special premieres tonight at 9/8c on Bounce TV. 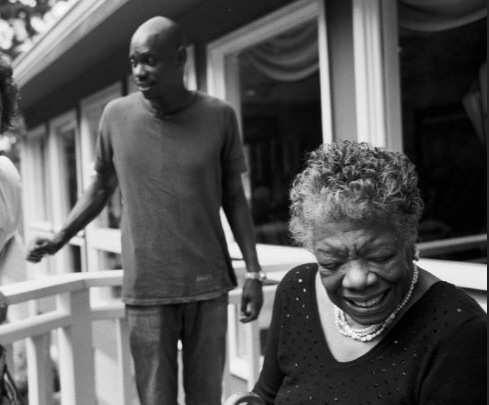 Read More
As news spreads on the passing of writer and poet Maya Angelou, we take time to highlight a… 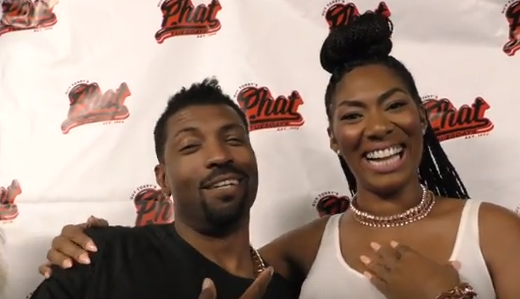 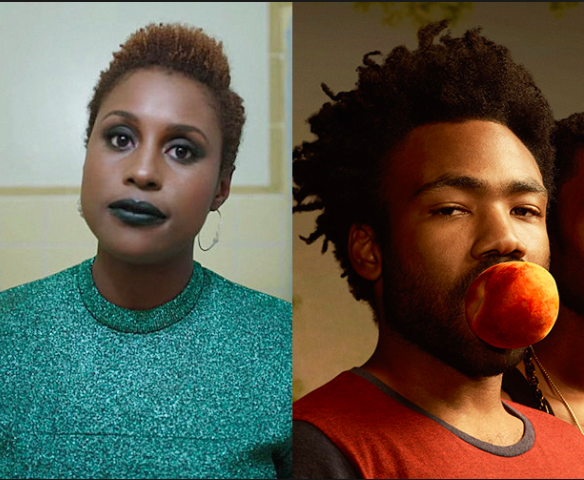 Read More
MTV is now expanding their coverage of award winning performances to TV. As you may recall the network… 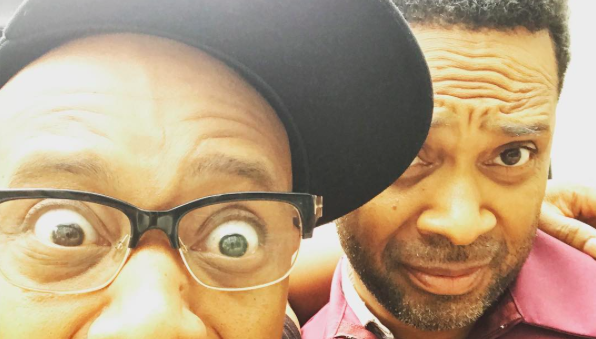