On the season finale of Showtime’s ‘Who Is America’, Sacha Baron Cohen would take things to another level when he invited OJ Simpson to sit down with him for a rare appearance. END_OF_DOCUMENT_TOKEN_TO_BE_REPLACED

Another comedy great has now joined that cast of Netflix’s upcoming Dolemite flick, entitled ‘Dolemite Is My Name’. Thanks to several newly released pictures, it now appears that Chris Rock will join the already all-star cast. END_OF_DOCUMENT_TOKEN_TO_BE_REPLACED

Sexual harassment has been at the forefront these last few years as more and more celebrities have been outed for their behavior. Yesterday in a campaign with ‘Times Up’, Donald Glover narrated a PSA to help anyone who is confused on what to do and what not to do in the workplace. The feature was directed by actress Rashida Jones.

Cedric The Entertainer’s hard work will finally be acknowledged by The Hollywood Chamber of Commerce as it has been announced that he will receive a star on The Hollywood Walk Of Fame. Cedric’s star will be apart of the upcoming 2019 class for his work in ‘Live Performances’. Currently, Cedric has been on the road for the ‘Comedy Get Down tour’ with fellow comedians George Lopez, DL Hughley, Eddie Griffin and the late Charlie Murphy before his passing. A date has yet to be announced for Cedric’s upcoming ceremony, congrats!

As you should know, Jamie Foxx is currently hosting a new season of his music game show, ‘BEAT SHAZAM’ on FOX. The series challenges its competitors in identifying some of the most popular songs in recent years. Comedy Hype was able to get our hands on an exclusive look at tonight’s episode with Jamie and daughter Corinne Foxx. In the exclusive, we see competitor Tatanisha take front and center with a lip-synced performance of Dreamgirls’s ‘And I’m Telling You I’m Not Going’. Jamie, who actually starred in the 2006 film of Dreamgirls would end up helping Tatanisha have her moment. The newest episode of ‘BEAT SHAZAM’ airs tonight at 8:00-9:00 PM ET/PT on FOX.

Watch the exclusive, below. 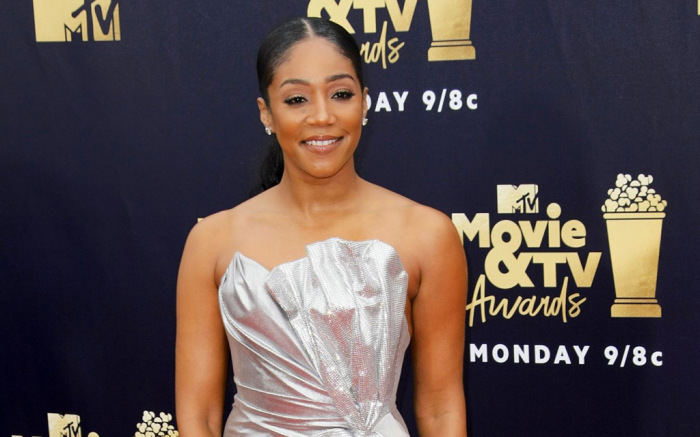 Tonight’s the night, Tiffany Haddish will take to the stage to host this year’s ‘MTV Movie And Video Awards’ at 9PM ET. As expected, we look forward to Tiffany to bring her uncensored and unpredictable style as the night’s host. The show was pre-filmed on Saturday and we’ve been able to get a glimpse of what went down. MTV has released a clip on some of who Tiffany joked about during the ceremony.

In preview, Haddish locked in on The Kardashians and found a way to perfectly compare the reality show family to the Star Wars story.  “They make a ton of money…. a new one is always popping up… and they’re ruled by a bossy overlord, who sleeps with a mask, and loves black men,” Haddish would say while Kim and Kris Kardashian looked on. Once done with ‘The Kardashians’, she then moved her focus on actress Zendaya. Check out the teaser clip, below.

As reported last week, ‘Desus And Mero’ looked to have packed their bags at VICELAND as they eyed a new deal with Showtime. Well, today news was officially announced that the comedy duo will star in a weekly late-night talk show for Showtime. According to Deadline, the show will be a half-hour program expected to premiere in 2019. The last episode of ‘Desus & Mero’ on VICELAND will be on June 28th. The new ‘Desus & Mero’ show will start where the original left off as the men talk with guests and take on pop-culture.

Desus and Mero are coming off a two-season run on Viceland where they have hosted their own daily late-night talk show, Desus & Mero. The two started telling the staff about their pending departure from Viceland last Thursday. The show’s final episode is expected to air June 28. As we previously reported, Viceland tried to keep the duo onboard with a new deal but they got an opportunity they felt they could not pass on.

A new feature on Katt Williams went out today for GQ, and it would further delve into the world of the legendary comedian. GQ writer Devin Freidman would spean some time with Williams to further understand who he is and his outlook on things. They would touch on conspiracies, religion, and more. The main thing many will take away from the piece is that Williams is a man of many layers. The feature also includes a comment from Donald Glover on Katt, who cast Williams for season 2 of ‘Atlanta FX’.

Glover would share his personal admiration for someone like Williams who is a free thinker and has a sense of fearlessness.

Donald Glover cast Katt Williams to play a pivotal role in the first episode of the new season of his show, Atlanta (a remarkable episode of a remarkable show). I asked Donald if Katt had shared his views with him. For instance, did Katt tell you about how evolution was fake but giants are real and they built the technological marvels of antiquity? “Hahaha,” Donald Glover said. “No.” He paused for a minute. “I feel him, though. I feel him. It’s just like, we get lied to so much, and he knows that. And I think part of his chip is like: ‘I don’t have to believe any of this.’ You know? Which I kind of respect.”…“People are going to think what they’re going to think,” Donald said. “You can’t control that. I mean, like, you can, but then you’re living your full life for another person.” Then he adds, “And he’s not afraid—I’m kind of envious of some of the ways that he’s not afraid.”

This July 6th, Lakeith Stanfield will star in the film ‘Sorry To Bother You’. As mentioned, the film follows a black telemarketer (played by Stanfield) who eventually finds a great deal of success with his job. Jermaine Fowler also features in the film along with Tessa Thomspon, Danny Glover, Terry Crews, and more. Yesterday, Fowler and Stanfield would make a trip to ‘Big Boy’s Neighborhood’ to talk about their careers and of course new film.

When asked if a season 3 of Atlanta FX is upon us, Stanfield would tell the show’s host that “Season 3 is not confirmed.” Cross your fingers ‘Atlanta FX’ fans, and hopefully, we don’t have to wait another for the show comes back. Check out the full interview, below.

Season 2 of ‘Atlanta FX’ is behind us but there’s still so much to be discussed. Like will we ever see Tracy again? If you were to re-watch an episode from the latest season, the show’s ‘Teddy Perkins’ episode would be at the top of our recommendations. When it first aired, people immediately took to their social media channels in search for understanding in what they were watching. The episode has everything in it.

During a new installment of Indie Wire’s Filmmaker Toolkit podcast, director Hiro Murai would open up about the episode and its process of coming together. Murai would end up revealing that many people on set including Lakeith Stanfield didn’t even know that Donald Glover was playing Teddy Perkins for quite some time. “As soon as I saw him (Glover), I just started laughing because I was so relieved. I just knew it was going to work just based on how I felt just staring at him,” Hiro explained during his interview. If you were creeped out by Teddy on TV, can you imagine how creeped out some the crew was during filming?

Take a listen to the Murai’s full interview on Filmmaker Toolkit Podcast as touches on his career, Atlanta FX, This Is America, and more:

The latest cast member of ‘Roseanne’ to speak out on the show’s cancellation comes from Sara Gilbert. Gilbert, who played Darlene Conner-Healy on ‘Roseanne’ talked with viewers of CBS’s ‘The Talk’ about she’s dealing with ABC’s decision to remove her series. As you should know, ABC removed ‘Roseanne’ for a racist Tweet from the show’s star, Roseanne Barr. “I’m sad for the people who lost their jobs in the process, however, I do stand behind the decision that ABC made,” Gilbert would tell the live studio audience. Check out her full comments below, in case you missed it. What do you think ABC should do next?

Before a series of comedy shows in Houston, David Alan Grier would stop by The ‘Madd Hatta Morning Show’ and highlight some points in his career. Grier would walk the show’s host through his experiences on ‘In Living Color’ and even that time he hosted ‘Saturday Night Live.’

At one point, the comedy great would even be asked about the newest Jumanji film. Back in 1995, Grier would co-star in the film’s original with Robin Williams. For Grier, he would express that he hopes to see more original works be pushed as Hollywood’s current trend appears to be reboots. “My whole thing is stop with the reboots…. You know their remaking Super Fly?… I watched the trailer .. I was like “He’s a male model?,” Grier would joke to the show’s host. It is interesting to note that Grier’s film ‘Boomerang’ is also in the reboot chamber as BET announced they will bring back the comedy flick as a series. Take a look at the nearly 30-minute conversation with Grier, below.